If you’re just starting to read my blog, please read both the About Me section and the first part of this summary.

So, in the first part I covered the illnesses that I was diagnosed with (or knowingly suffered from) before I turned 18. After graduating high school in California, I moved to Colorado to begin college (August 2008). It didn’t take long for my health to get all out of whack. I ended up having ovarian cyst issues in March 2009, which ultimately ended with surgery in June 2009 to remove a large and stubborn cyst. Thankfully, the cyst problem doesn’t appear to be chronic. However, I ended up getting diagnosed with several other invisible illnesses, which are explained below in rough order of diagnosis. From oldest to most recent, this post will cover: migraines, plantar fasciitis, and fibromyalgia.

These are terrible headaches. Technically, there are worse headaches as far as pain is concerned, such as cluster headaches, but migraines are especially awful because of their other symptoms. My migraines ALWAYS come with nausea, and most of them have sensitivity to sound and/or light. There are times I’ve yelled at Dan for breathing too loudly… when he’s across the house from me. Sometimes they get so bad that I vomit. However, I don’t actually take any prescription medication for them. If I notice one is coming (usually do) I can take Excedrin Extra Strength (the migraine version doesn’t actually work for me, oddly) and either stop it or make it present as a regular headache. I started getting migraines in 2009.
Unfortunately, I also get other headaches and cluster headaches often. I’ve been getting cluster headaches and normal headaches since elementary school.
While not perfectly controlled, I do not need to take any drastic measures (or meds) to cure them. Because I’m just taking an OTC (over the counter) medication, that works most of the time, I consider my migraines to be controlled.

Okay, so technically, plantar fasciitis is not medically considered a chronic condition. Despite that, mine never fully healed, so it will probably be around for quite some time. Luckily, it’s gotten better, but it doesn’t take much to make the pain flare back up.
There is a thick band of connective tissue that connects your toes to your heel, supporting the arch in your foot. That band is the plantar fascia. The plantar fascia directly connects to other connective tissues that run all the way up the back of your leg to your hip joint, organized as if someone had drawn a stripe from your toes to buttock. Since “itis” means an inflammatory condition, plantar fasciitis means that the plantar fascia is inflamed. This inflammation is normally noticed as bad heel pain, and most patients notice it before it gets complicated to treat. I was not one of those patients.
I had not needed to work while I was in high school, and was never able to find a summer job. Therefore, I had never been on my feet on cement for long periods of a time prior to the retail jobs I was able to get when I started college. I knew people were always talking about how much their feet hurt after work, so I just assumed the pain in my feet was normal. My retail jobs started around May 2010, and I held two jobs until August 2010, when I decided to quit one. Originally, the pain wasn’t too bad (it didn’t take long to appear), but I thought I just needed to focus on more evenly distributing my weight. When it started to get worse I attributed it to working more hours, so being on my feet longer, and kind of a “build up” of pain from when I started my jobs. Suddenly, and I do mean suddenly, the foot pain (in both feet) became so bad that I couldn’t walk without the aid of crutches to take most of the weight off my feet (around November 2011). Even then, I would wince with pretty much every step. I got sent to a podiatrist, and he performed an ultrasound to see what my plantar fascia looked like. He stared at the image for a bit longer than normal, and then looked at me with disbelief and asked, “How are you even walking?!” and I pointed at the crutches. Turns out, both of my plantar fascia were torn in several places. I had to get several cortisone shots (those hurt worse than any shot I’ve ever gotten) in my feet so that I could walk to the restroom and kitchen while Dan was at work. I stayed off of my feet as often as possible for several months (not easy with everything that was going on in our life at that time). It took forever to heal (I don’t actually remember how long), and even now I get excruciating foot pain if I’m on my feet for any significant length of time, even in good shoes. Since I still get the pain, I definitely consider it chronic at this point.

This was the first of the rare conditions that I was diagnosed with in my twenties. Dan and I got engaged November 2011. In March 2012, the girl that was my maid of honor came out to Colorado (from CA) to help me shop for a wedding dress the week of my birthday. One of the days she was out here, we decided to take her skiing (Dan, her, myself). I’m not very good at skiing, though I’ve been learning fairly quickly. We ended up going down a rather difficult blue black trail, which was giving me panic attacks. I had to keep stopping to regain my calm to keep going. I hadn’t fallen the entire day (this was about 2pm, we’d been there since about 9 or 10), but as I was standing on the side of the slope regaining my composure, I suddenly got a sharp pain in my knee. I’ve had knee issues since I was about 12, but this was a new one. I knew not to mess with it though, so I told Dan and my friend to continue skiing, and went to sit at the base. By the end of April, it still wasn’t better. At the beginning of May, I slipped on some smooth cement stairs and ended up locking out my knee when I tried to catch myself. The pain just wouldn’t go away, so I got imaging (xray and CT) done and started physical therapy. Nothing was physically wrong, and my PT couldn’t understand why it still hurt once we fixed the mechanical issues. One night, very suddenly, I started crying while lying in bed because it felt like my entire body was swelling up and covered in a sunburn and getting squeezed and had ants crawling on it. Dan and I freaked out because it was really new and a terrifying condition. I took some Tylenol PM and put heating pads and ice packs on different parts of my body (depending on what felt good where) so I could sleep, because we were trying to pay for a wedding and I didn’t want to pay for an ER visit; I had a PT visit the next day anyway. I told my PT about it, and he told me to go see a doctor that he knew that was very good at various autoimmune and pain conditions. That doctor (a rheumatologist) ran more tests and ended up diagnosing me with fibromyalgia in January 2013 (yes, almost a full year after the knee thing). He thinks that the difficulty sleeping due to the knee injury triggered it. We tried Cymbalta, which unfortunately made it worse for me (it can work wonders for other people). Then he put me on gabapentin and a muscle relaxant, which worked wonders! I’m off the gabapentin now and have been able to reduce the muscle relaxant significantly (it helps me sleep). Light exercise helps, and my fibro is almost entirely controlled now.
For me, my fibro symptoms involve: widespread pain (diagnostic criteria actually), fatigue, pain flareups (especially with cold weather or over exercise), slower recovery from physical exertion, reduced strength, hypersensitivity to touch (that can vary hour by hour), heightened senses of smell and hearing, inability to regulate body temperature easily, brain fog, and stiffness in my joints. 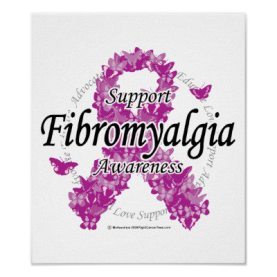 The Rest of the Story

Please check out my Invisible Illnesses board on Pinterest for even more information (and some chuckles) about my conditions.