So, I wanted this post to be entirely written from Dan’s perspective, but he isn’t comfortable with doing that. He wanted me to do it Mad-Libs style for him… but I’m not comfortable doing that. What am I going to do instead? Well, I’m going to do it survey style. By writing out questions that he can answer on his own, he has the freedom to elaborate as much as he wants to, or doesn’t want to. The questions are going to be in third person, which can be kind of odd to read, but should feel more natural after the first few. 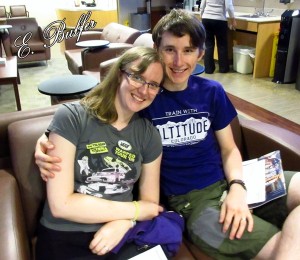 So let’s get started!

Firstly, how was Lizz prior to the surgery?

She seemed somewhat nervous but wasn’t as bad as I expected. Her sense of humor was in a slightly outlandish mode to mask some nerves and I was joking around to help keep her distracted. Also – adding to her humor – she was still pretty tired from having to get up at 5 am. 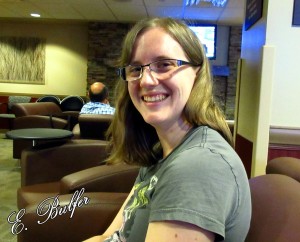 How long did the surgery take? What were you doing while you were waiting? How long did you have to wait to see Lizz after her surgery?

The surgery itself (the time she was in the operating room) took about 45 minutes, but they started administering some of the drugs about 15 minutes before then and it took about an hour after to recover from the anesthetics. My mom, Lizz’s mom, and I sat and talked in the waiting room most of the time and did a little bit of reading.

How did you feel once Lizz was taken to the operating room?

I wasn’t too worried about the surgery going well since up to this point the doctor seemed very competent and the surgery wasn’t a very complex one. I was more worried about how Lizz would do with any pain or nausea once she was awake. Thankfully the two hours until seeing Lizz again passed fairly quickly since I had people to talk to.

How was Lizz immediately after waking up?

When the surgery was done the doctor came and told me that everything went very well. They had to make a cut behind her ear (which was somewhat expected) but the cyst was easily removed and the graft onto her eardrum took well. The nurse called me after she was waking up and said she was doing well. Later, when I got to see her, she was somewhat groggy but definitely awake enough to communicate, and she was awake enough to voice her sympathy for a little boy (about 2 years old) across the room who was crying after his surgery.

Lizz in her awesome medical gown. Add the bandage in the photo below, add some grogginess and that’s about how she looked when it was all done.

When did she first start to feel pain after the surgery?

The pain came on as she woke up and intensified as she became more awake. By the time we got home she needed a Vicodin, which was followed up about an hour later by a second Vicodin. According to her, the pain level was at an 8 or 9, which is saying something because for her a 5 is more like a regular person’s 10. Luckily, she has been able to sleep most of the time so that helps.

How is Lizz doing emotionally?

Lizz seems to be ok. I know she’s probably a little frustrated with the pain and having a giant earmuff for a bandage, but I think she’s also glad to be done with the surgery. She was stressing quite a bit in the days leading up to the procedure so I imagine this is a big weight off her shoulders.

Any crazy stories from the anesthesia or pain medication?

No, since getting home she’s been either fairly lucid or asleep.

Has the surgery made her dizzy?

She was very dizzy at the hospital. It’s improved now, however, she hasn’t been up and about to check. The only other side effect of the surgery so far seems to be the intense pain. To reference her earlier post, there’s no facial paralysis or numb ear (as far as anyone can tell under the bandage).

How are you doing now that the surgery is done (emotionally, physically, etc)?

Physically I’m tired from waking up at 5 am. Otherwise, I’m relieved that the surgery has gone well. I’m also glad that the saga is almost over and now Lizz just needs to recover. The last several months of trying to get rid of the ear infection have been pretty difficult so it’s kind of like starting a new chapter in life.

What is she doing now? 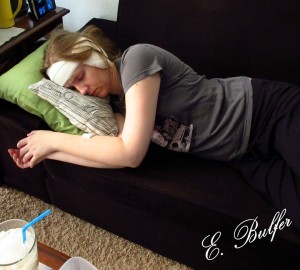 What are you doing now?

Trying to relax and get dinner going with the help of Lizz’s mom.

I’m just glad this is about done. Hopefully there will be no more ear issues and we can get back to living life a little more. Also, here’s a cat (Artio) photo because who doesn’t like one of those:

Artio’s bed got displaced by Lizz so this is what happens.

Overall things are looking up!