As you probably know, I’ve been struggling with some serious back pain and problems since October. Using this pain scale, I have been at an eight since October. Sometimes I get lucky and might drop to a six, but that is extremely rare. It all started so suddenly, that my physical therapist – I’m in constant physical therapy to help keep my body functional despite my health problems – got quite concerned. She thought it would be a good idea if I went to an orthopedist.

The orthopedic appointment was a nightmare. The guy brushed me off, told me the spine doesn’t move (it does) and that my physical therapist was wrong. He never looked at how I moved, in fact, he never touched me. He didn’t even let me fully explain, and kept cutting me off to tell me I was wrong. They did do two x-rays (one from the front, one from the side) that I’m assuming he looked at because he said nothing was broken. He pretty much told me that it was all muscular – it isn’t muscle pain, trust the fibro warrior on that one – and dismissed me with a “you should go to a physiatrist because they deal with the muscle stuff and movement.” I have never been so belittled and degraded at a doctor’s appointment. Even Dan left that appointment feeling like he was 3 inches tall. (I screamed in frustration when we got to the car.)

Joleen, my physical therapist, was a little horrified, but she was aware that a few surgeons out there just do a “you’re not a surgery candidate, get out” type of thing. She did agree that a physiatrist may be more helpful. So I went to the physiatrist.

The physiatrist appointment was an entirely different experience! Technically, I saw the nurse practitioner physiatrist. She did a full range of motion testing (ouch) and listened very well. She was upset that the orthopedist had brushed me off like that. Then, because I was complicated, she did go get the physiatrist (Dr H). He redid some of the motion tests (she’d narrowed down the problem areas, so he was getting his own opinion on it), and we decided on a plan. They were going to send me for an MRI of my lower back, and they gave me a prescription for Mobic (generic: meloxicam), which is a strong, 24 hour anti-inflammatory medication. I decided to hold off on the Mobic because the side effects seemed a little high, and I wanted the MRI to show all the problems.

I had my MRI on Tuesday, the 17th, and my follow-up was Thursday, the 19th. And, we actually got some answers.

So, there is a ton wrong with my back. Unfortunately. First, some basic spinal anatomy is necessary.

The lumbar vertebrae (lower back) are labeled L 1-5. The sacral vertebrae are labeled with an S, and technically they’re all fused (or most should be, sometimes S1 is not fused to the others). Vertebra #1 is closest to the head. The discs are labeled by which vertebrae they’re between, so the disc between vertebrae L1 and L2 is called disc L1-2. 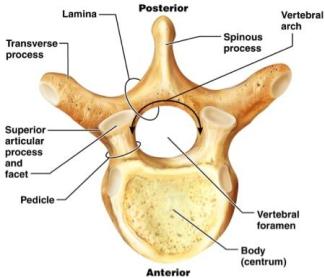 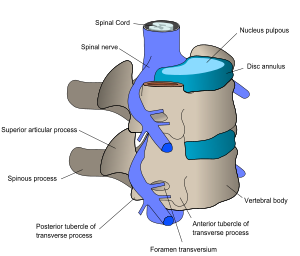 First, we’ll start with the discs. My first several (L1-L4) are fine, the problems don’t start until the L4-5 disc. L4-5 is bulging towards the spinal column, but only slightly. Thankfully, the L4-5 disc is not causing stenosis of any kind (narrowing of a nerve canal). Dr H said that almost everyone age 25 and over have at least one bulging disc, and most never have any symptoms from them. It’s a statistic I’ve heard before. That one probably is almost definitely not causing me any pain at all, ever. L5-S1 is a different story, however. It’s bulging ever so slightly, and it also has a small tear – still no stenosis though, thankfully. Because of the tear, most of the fluid in the disc has left, meaning I have early degenerative disc disease in that disc. He said that the L5-S1 disc probably causes me some intermittent pain, because when the fluid oozes out it can irritate the spinal column. However, the pain wouldn’t be full time, which is why it only hurts sometimes when I bend over (where the tear is, the pain would only occur when I try to touch my toes) but I can bend over just fine at other times. However, he wasn’t really concerned with the discs at all. 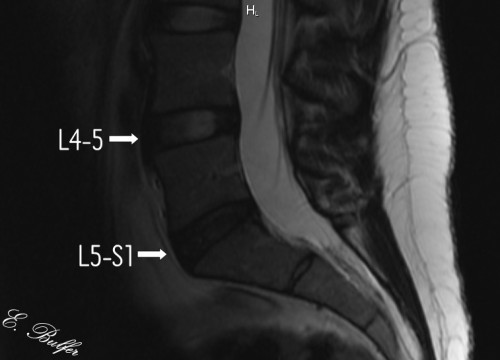 My MRI: You can see the dehydration of the L5-S1 disc (no white fluid in the middle) 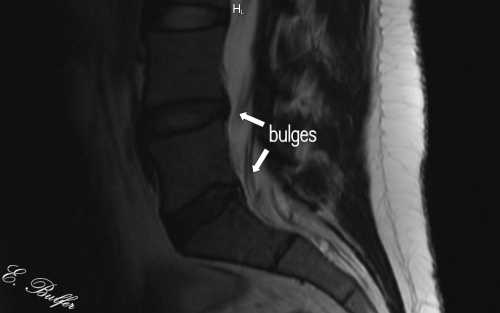 My MRI: You can see the bulges at L4-5 and L5-S1 and you can see a little fluid outside of L5-S1 (it’s the white blob between the disc and spinal column)

There are joints called facet joints along the spine. These joints are how each vertebra connects to the next one. There are technically four different ones on each vertebra: top left, bottom left, top right, bottom right. As with the discs, the joints are labeled as which two vertebrae they connect (L4-5, etc). The facet joints are also designated by side (L4-5 left, etc). I, unfortunately, have facet arthropy in several of my facet joints. Facet arthropy is a disease or abnormality of the facet joint, aka arthritis. That means that I have spinal arthritis. The problem areas are the left L5-S1 facet joint, and both facet joints at L4-5. The L5-S1 facet arthropy is not causing any stenosis nor foraminal narrowing (narrowing of the foramina – hole – through which the nerves exit the spinal column and enter the rest of the body). The L4-5 facet arthropy, however, is causing “minimal foraminal narrowing,” though there isn’t any “nerve root impingement.” So, while the hole the nerves pass through has gotten slightly narrower, the nerves are not being pinched in any way. The facet arthropy is definitely causing some of my pain, as the movement tests that check the facet joints cause me discomfort. However, he does not think they are causing all of my pain. 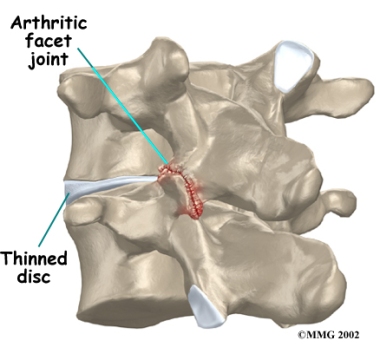 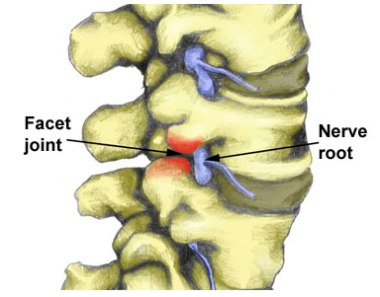 Based on the physical examination, my right SI joint (where the sacrum connects to the rest of the pelvis) is the source of most of my pain. My left SI joint causes me discomfort as well, but not nearly on the same level as the right side does. Unfortunately, the MRI doesn’t show the SI joints, so we couldn’t see if something was actually happening inside them.

I am now starting the Mobic, and we are going to move forward with a cortisone shot into my right SI joint. This shot is only as risky as any other shot (bleeding, infection due to breaching the skin, etc). It’s an imaging (I believe he said x-ray) guided shot, with contrast, and I can be sedated if I’m worried about pain (or nervous, haha). This shot is diagnostic, and has some treatment value. Diagnostically, it will tell us how much of my pain is actually coming from my SI joint versus somewhere else (based on how much pain it alleviates). Treatment wise, it should eliminate enough pain that I can push forward slightly more aggressively with my physical therapy (and it should temporarily alleviate enough pain I can regain some sanity and quality of life). Based on the cortisone shot, we will determine the next course of action. 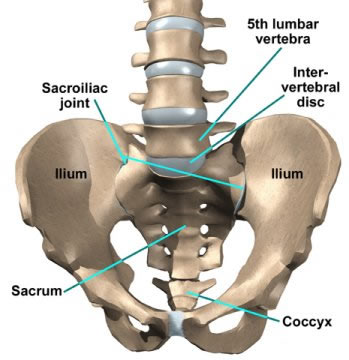 I will be discussing all of this with Joleen on Monday, and hopefully we can come up with a therapy plan that will help the pain. We still don’t know why I was having multiple dislocations, but at least we have a solid direction in which to go to get rid of the pain I’m experiencing.

4 thoughts on “Back Problems – MRI Results”