My specialist immunology appointment was Monday, January 23rd. In summary, I got the referral (it’s a referral only clinic) due to confusing allergy shots complications. I was thinking I probably had MCAS (mast cell activation syndrome/disorder), my gastroenterologist suspects I may have eosinophilia of the small bowel, and I really just want to know what’s going on and why I’m so itchy all the time. Thankfully, none of my unknown allergy attacks have actually resulted in anaphylaxis; I just get miserable. 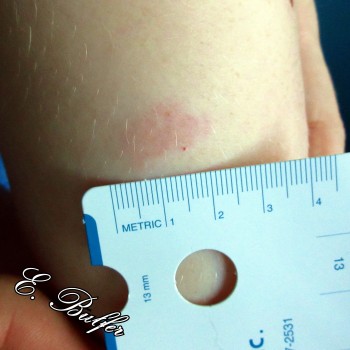 My arm after an extremely low dose allergy shot.

After speaking with the doctors, (the main clinic doc and one of his fellows) we were feeling even more confused. We (Dan came with me) had a good appointment, and left with a diagnostic plan of action, but didn’t get any answers. During the appointment, it sounded like they were very dubious of me having MCAS and/or mastocytosis, so Dan and I were suddenly unsure of where this plan of testing was going to take us. They ordered a full CBC to compare to the one I just had, and a tryptase test to screen for MCAS/mastocytosis. Tryptase is excreted by active mast cells, and above-normal levels can indicate mast cell activation or too many mast cells (or both). I am also going to get my environmental allergy testing redone in the middle of February, and they added an antihistamine nasal spray (and suggested a moisturizing, Vaseline-esque (protectant), nasal spray to help heal a sore I’ve had in my nose for about 3 years now).

They did do a spirometry test (breathing test) in the office, to check my asthma, and it turns out that it is not active! Yay! I am betting I still have symptoms when I exercise, but my “just sitting around” asthma is gone now! I’ve had asthma since I was five, so I’m very excited about this!

We thought the tryptase and CBC would take a while to come back, but it only took two days.

The ‘u’ means ‘micro.’ The eosinophils are in the same units as my previous blood test.

The rest of my CBC was completely normal.

As you can see, my tryptase level is actually the low end of normal. The doctor said that because my symptoms don’t completely fit and the tryptase is so low, they’re pretty much positive I don’t have a mast cell disorder.

We, on the other hand, are not so sure (Dan and I). I’ve read a lot of things about how MCAS sufferers continually have low tryptase levels (like The Hospital Princess and Chronically.Jaquie). Even when I mentioned that to the doctor when she called, she said it’s a very good test and they’re positive I don’t have a mast cell problem. When we were talking to them in the office, it sounded like they don’t really believe that MCAS is actually a separate thing, so I’m still thinking I might have MCAS even if they think I don’t. If we can’t find another explanation, I will be on the hunt for yet another opinion.

There is definitely something going on that I currently just call “complex allergies.” I don’t think that’s an actual term, but my allergies are not just standard allergies and have been increasing in severity for no known reason. Along with suspecting MCAS, I’m wondering if I may have systemic eosinophilia. I’m not thinking I have both, but I do think I have one. There may be an allergy condition that I don’t know about though. I also realize my blood counts aren’t quite definitional for systemic eosinophilia, as systemic eosinophilia is usually considered at eosinophils higher than 500 (though lower than 1500, because anything higher is hypereosinophilia). However, you can also have tissue eosinophilia, which means your blood counts could actually be completely normal but your tissue biopsies show too many eosinophils. 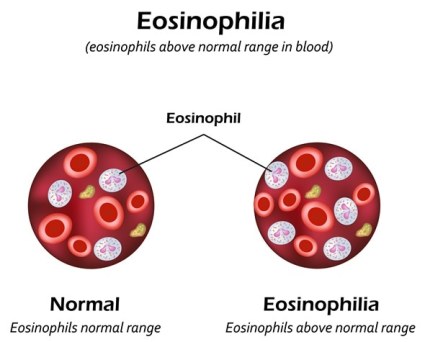 The new immunologist was intensely interested in my eosinophilic esophagitis, however. He ordered the results, for the actual numbers, from my gastroenterologist. He also sounded like he wanted to remove me from eggs and dairy, because apparently they’re the most common irritants. However, I know for a fact those aren’t irritants. I did the six food elimination diet when I was diagnosed, and nothing caught in my throat when I added eggs nor when I added milk back in. NOTHING! He was trying to say that it wouldn’t catch on the milk because it’s liquid, well obviously, but it would catch on food I’m eating at the same time (which it doesn’t do with any more frequency than when I’m not drinking milk). My throat has completely closed on food, so it would definitely close on eggs. I also eat eggs with either toast or muffins or something similarly dry, and those never stick (literally never had a single muffin stick in my throat). I’m almost positive one of my main irritants is yeast, because quick breads (those without yeast) have never stuck but yeast breads are one of the most common things that gets stuck in my throat (or are a component of the meal that results in things getting stuck). I’ve had random things get stuck too, but I definitely noticed a pattern with the bread. I will not be giving up eggs or milk, it was extremely difficult and stressful during the elimination diet (for only about a month) and stress that high flares my IBS quite badly. I will definitely fight the immunologist on that to the point of being labeled belligerent, if I must. Unless any blood testing can empirically show that those foods definitely set off my eosinophilic esophagitis or something with my intestines, then I will not be giving them up.

I’ll be interested to see what comes of the eosinophilia stuff, however. I definitely think I have at least one more eosinophilic condition. My blood counts have been over 500 before, and that was before I was on the ranitidine (the thing that has controlled my EoE the best). We shall see what the future holds.

I’m also interested to see what the results of my allergy testing will show in February. If they’ve changed significantly, then it’ll at least prove I’m not making up the increase in my allergies.