My LEAP/MRT follow-up with the dietitian is on the 21st, so just 7 days now! While I’m really nervous about what I will be able to eat, I’m very excited because I think this will really help!

For an overview of LEAP/MRT, and why we are going that route, be sure to check out my More Dietitian Changes post!

Dan and I have definitely noticed that there are a few meals that make me feel quite ill, so we decided it would be fun to make some guesses. There are also foods that cause significant oral symptoms (itching, tongue rash, etc) and that seem to trigger my eosinophilic esophagitis (E0E). Obviously, Dan was only able to make his guesses based on the times I’ve told him something seems off. These guesses are just for if we think the foods will be “not green” (either yellow or red), not the degree to which they will be no good.

The key for this image is kind of complex:

(There will be additional information under the image as well.) 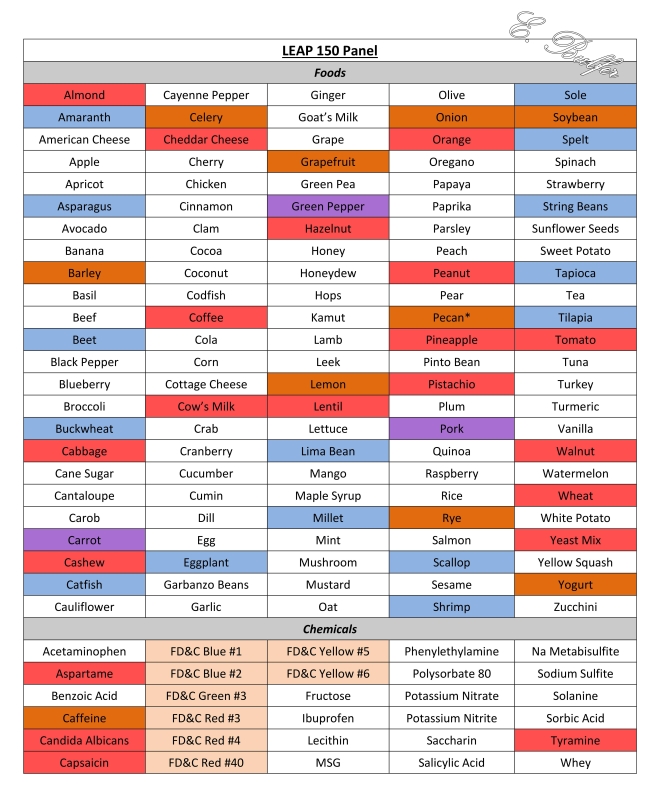 Our guesses for “no good” items

The reason there is an asterisk next to pecans is because I don’t know if I’ve ever had them. My inability to eat nuts was developmental (about age 14), so I’ve eaten a lot of the other nuts, but I’m not sure about pecans. However, I marked it orange because Dan thinks all nuts will show a sensitivity, even if I’ve never had them.

The reason the food dyes (FD&C color number) are a pale orange is because Dan thinks I’ll show a sensitivity to some of them, but he’s not sure which ones. I’m hoping he’s wrong, as that gets really complicated, but I honestly wouldn’t be too surprised.

I do know that I’ve been exposed to amaranth flowers (they were in my wedding bouquet), but I have no idea if I’ve eaten it! Dan is pretty sure some of the things I marked blue are in foods that I eat, but I really didn’t feel like going through and checking every ingredient label in my kitchen for the purpose of guessing!

I know that my skin test showed allergies to things I didn’t mark, and I did that because the skin tests for foods are unreliable and I don’t get many symptoms. Cocoa remained unmarked due to optimism! I do get some symptoms eating certain types of chocolate, but I’m hoping it might be a different ingredient causing the problems (Hershey’s and M&Ms are the biggest problems).

Based on my other blog posts, do you have any guesses about what I may be sensitive to?

7 thoughts on “It’s Almost Time to Get the LEAP Results!”

I'm allergic to all nuts, peanuts and tree nuts, and cabbage. I avoid those allergens completely. I'm also allergic to yeast, beans, aged cheeses, and chocolate. Those, I can eat every third day.

I'm a notoriously picky eater. Like, extremely picky. When I moved out to Colorado (yes, at age 18) I pretty much only ate a handful of foods. I didn't mind being in a rut, and it got easier to be in a rut when I didn't have access to a kitchen. It worked out alright when, even with access to a kitchen at Dan's house, we ate out all the time. I'd just order the same thing, but Dan could have variety. However, when we decided to start making dinner at home more often (so much healthier, we were both feeling the fast food in not so fun ways)... then there were problems. He desperately wanted variety, so I decided I could try things. Surprisingly, I found new foods I actually like! So, here are several recipes that I actually quite enjoy. Hopefully, you can find a few things that you like too.
Join my email newsletter!
You'll get exclusive content, and be the first to know about any special events/sales I'm having.
Just click here to join!
Follow Finding Life's Silver Sun on WordPress.com