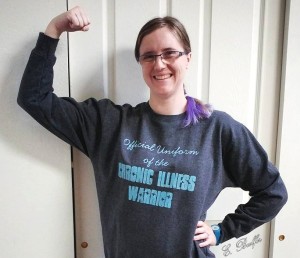 For the past two years, I have had rather severe nerve pain in my right arm. I haven’t talked about it a whole lot because we had no idea why it was happening or what we could do about it, so I just tried my best to keep going despite it. The past six months, however, the pain has gotten to a point where I just cannot ignore it any longer.

I am right hand dominate, so not using my right arm just isn’t an option for me. These past six months, I have had to give up writing anything by hand past a few sentences, change how I use my phone, modify my typing, and change a lot of my habits with how I move around during the day.

When the pain started, it was pretty severe as well, but it’s only gotten worse and more frequent. (Please read the links in this paragraph to get the entire story about my arm pain, links are to my own posts and appear in the order they were written.) January 2016 was my first time writing about it on my blog, in my post titled “Nerve Pain.” Then, we thought my nerves had just gotten too tight because I was spending too much time on the computer or my phone so they had shortened (kind of in a way similar to how your Achilles tendon shortens if you wear high heels all day every day). Then, I started having a lot of neuro-muscular symptoms in general, and it was quite concerning. The arm pain and other symptoms progressed, and I became more worried. I did summarize all of my strange neuro-muscular symptoms in the middle of February 2016, because my blog posts had been disjointed and so that I could keep everything straight in my own head. I did end up at a neurologist, who took a thorough oral history, did a physical exam, and decided to do an EMG (and eventually did an MRI) – but it was normal (so was the MRI). Eventually, we just decided to keep going with physical therapy, and the pain in my arm became something I thought I just had to live with. Unfortunately, in September 2017, it got a lot worse and started to cause me a lot more problems. But, I couldn’t find a doctor that was willing to help me. I had a second EMG, which was normal, and an ultrasound of the nerve in my elbow, which showed the nerve was normal but that my triceps tendon was potentially getting inflamed and pinching the nerve. (You can get some more details from the ultrasound by watching the highlighted story set on my Instagram.) But, all I was being told was even though I have been doing “everything right” for two years without improvement, that was all we could do. (I do mention a little more about things in the second half of my “Look Back at 2017” blog post.)

I told my neurologist I wanted to get a second MRI of my neck, upright this time, to make sure things hadn’t changed and were causing me problems. Thankfully, while the MRI did find problems, I do not have anything in my neck that could be causing nerve pain in my arm. With the second EMG being normal, I thought I was out of luck, but my neurologist understood I was not okay living with this pain and decided to refer me to a new orthopedic doctor in the UC Health system.

After thoroughly explaining my symptoms, the doctor at UC Health told me that I had two options: do what I’ve been doing for two years and hope that it gets better, or we could try the surgery. He said that I had a very clear cut case of cubital tunnel syndrome, and that not everyone with cubital tunnel syndrome has an abnormal EMG. A normal EMG is actually a good sign because my nerve is undamaged, so I should be able to make a full recovery with no lasting symptoms.

He told us to go home and think about it, and Dan and I were both like “yeah, why wait for the nerve to actually get damaged?” So, now we’re going to do surgery.

There are two potential surgeries, and we won’t know which one I’m having until I wake up (well, Dan will probably find out while I’m in surgery, but I won’t know until I’m awake). There is a “release” surgery and a “transposition” surgery. Both surgeries are open surgeries (they’ll cut a big enough incision to fully open it up and work in my arm) as opposed to laparoscopic.

The release surgery goes into the elbow, right over the channel the nerve runs through, and cuts all of the superficial ligaments that are putting pressure on my ulnar nerve. Recovery will be about two weeks in a soft wrap (essentially an ace bandage) with restrictions on use. Then gentle physical therapy for a few weeks, then I should be good to go.

The transposition surgery that I would [possibly] be having goes into the elbow, cuts all of the ligaments, then cuts a channel into the muscle, removes the nerve from it’s normal location, and buries it into the new channel in the muscle. Recovery is, obviously, more intense for this one. I will have a hard splint on my arm to prevent all motion for two weeks. Then, after the hard splint is removed, I will have to wear a wrist splint to prevent movement of my wrist as the muscle heals for another four weeks. After the wrist splint, there will be more intensive physical therapy (I imagine I can start some really basic stuff before it) for a longer period.

Why do we not know which surgery I will be having? Because the surgeon will determine it while he’s looking at my elbow. He will do the the release surgery, then reposition my arm (with it still open) such that the nerve could potentially sublux (pop out of the channel it’s supposed to be in). If my nerve pops out of the channel, or there are other things that are compressing it that cannot be cut, he will relocate the nerve so that I no longer have problems. The nerve popping out of the channel can be the cause of the cubital tunnel syndrome symptoms, so if he does the release and it continues popping out then nothing will improve. I’m glad he will be thorough and do the best surgery for me so that I hopefully will not have to have another surgery.

Honestly, I am hoping to wake up from the release surgery, but expecting to wake up from the transposition surgery. My elbow makes a lot of popping noises, and I can definitely pop something in and out of place in my elbow (I don’t do it on purpose, it happens when I use my arm). They did say that, sometimes, that popping can be due to the triceps instead of the nerve, but the pain I get with it makes me suspect it’s the nerve. And with my hypermobility, that wouldn’t surprise me at all.

When is the Surgery?

I am having surgery on March 27th. I realize that’s actually really fast from now. This is all happening very quickly, but we’re actually both really happy about that. We saw the new doctor on February 12th for the first time, had my pre-op on March 12th (and it turned out he and a fellow had discussed my case at length after the first appointment, so that’s really nice), and now I’m booked for surgery!

Luckily, my mom is going to be able to come out to help me. She’ll be getting here on the 30th. And the doctor was very understanding about all of my weird pain stuff and reactions to pain meds, so he’s actually going to give me hydromorphone because it’s one of the few pain killers that is effective without extremely nasty side effects. I’m so thankful that I should have adequate pain control since I am always in a lot of pain during surgery recovery.

I will write up a Q&A format post for Dan to will out again, like he did after my ear surgery, so that you can be updated. Obviously, being down one arm will make it very difficult for me to update! Be sure you’re following my Instagram, as that is the most likely to be updated first!