My menstrual cycle came on September 12th. I just sighed, and put in my menstrual cup. No underwear was ruined, even though it started while I was sleeping. Why? When the spotting started, I started wearing pads. I always spot for at least a few days before my period starts. “Now that’s not optimistic” may be what you’re thinking. And, you’re right.

Yes, I’ve heard of “implantation bleeding.” I’ve also read that many of us spot before our periods start, so that the only way to tell the difference is if you end up with no menstrual cycle and a positive pregnancy test after the bleeding. Trust me, I Googled the heck out of it when I first started trying to conceive.

The first two parts of my story are here: the beginning & the test results.

The first few cycles after I started getting positive ovulation tests (which was actually eleven cycles after we started trying), I bawled my eyes out for hours when my period would start. Completely incoherent, body shaking, choking on tears and phlegm, bawling my eyes out. It hurt. I cried so hard the act of crying became physically painful. I was exhausted. I was devastated. I just wanted it all to stop. 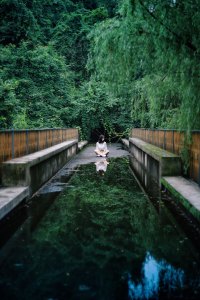 Something in me switched after the last break down. Suddenly, I stopped hoping. I wouldn’t let myself. People in my life would say “maybe this cycle” and I would shake my head and say “no, it’s not going to happen” and then shrug. When you respond that way, you get a lot of horrified facial expressions in response, by the way. I drastically cut back on tracking. No longer. I use Ovia for my cycle tracking, and I decided to stop tracking almost everything. I decided I wasn’t going to be tracking mood, emotions, physical symptoms, etc. If something is far from my “normal,” I will put it in the notes section. The app was getting my hopes up when it would say “nausea is one of the first signs of pregnancy that people feel” –  I know for a fact that I am nauseous every single day of my life due to my chronic illnesses (parts 2 & 3). So, I stopped symptom spotting.

I still do ovulation tests, and I’m still “acting” pregnant – for the most part. I would act pregnant during the two week wait (the two weeks between ovulation and being able to get an answer via a pregnancy test): nothing would pass my lips if it was even possibly a no-no for pregnant women. Now, I “act pregnant” during the week before my period is due to start. But not strictly. I looked up how long it takes a fertilized egg to implant, and it averages 7 to 12 days after ovulation, so that’s one entire week of the two week wait. What you do to your body can impact a possible fetus as the egg is forming, and after implantation. Between ovulation and implantation, the egg is just floating free somewhere in your system. What you do could impact implantation, if you do something that could harm your lining, but that’s about it. (Please note, I’m not a doctor. Do NOT take anything I say as medical advice, this post is simply a glimpse inside of my head.)

I had given up drinking alcohol in part due to Topamax (and never restarted) and because it doesn’t play nice with my conditions. Alcohol was pretty easy for me to give up, honestly. I do enjoy drinking socially, or if we go to places with interesting sounding cocktails, but we rarely have alcohol in the house so it isn’t something I’m around much. I continued to abstain from alcohol due to the fact that I “might be pregnant.” But, my first Clomid cycle included a family reunion for Dan’s mother’s side of the family, and I decided to have a few drinks (three total in 2 days). There is a cider festival on the 29th of September, and I love hard cider, so I’m going to enjoy myself.

Why? Because if this is going to take a long time, I’m going to restart living my life. I know these behaviors aren’t “ideal” for creating a child, but people get pregnant every year while doing the same things (or worse). Mental health plays a big part in being able to conceive, and that’s the part I’m focusing the hardest on. How do I protect me, my mind, my soul, my heart, through this? By refusing to lose myself anymore than I already have.

I wanted something to be wrong with the semen analysis. My body is so broken already, due to all my chronic illnesses, I didn’t want it to be me again. When the semen analysis was normal, I was frustrated: it must be me. But then I hoped something would be wrong with the HSG. I hoped because most of the common problems are fixable, or then we would at least have some answers. When that was normal, people were trying to be encouraging and positive, and all I wanted to do was bawl my eyes out. Why wasn’t I pregnant?! 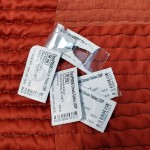 I started progesterone the cycle I had my HSG. The next cycle came and I started Clomid at the beginning, then the progesterone cream the second half of the cycle. I switched doctors because I was having communication problems with the one I had been seeing and was worried about their ability to handle my [likely] complicated someday-pregnancy. My cycle started on the 12th of September, the day of my first appointment with my new doctor. Thankfully, I felt a connection to the new doctor, so I’m optimistic that they can handle my care now. I’m doing Clomid again this cycle, and will do progesterone after ovulation.

This cycle is when I realized I was numb. But I can tell it’s a fragile numb. The fact that I sighed and went about my day, was a little startling. I talked to Dan about it and said “I’m not okay with the fact that I’m not not-okay.” I don’t like being numb, but I realize how important it is for me at this time. But then, I said “my body is broken” and the tears spilled out of my eyes. After some deep breathing, I was numb again. As I said: fragile numb.

Everything I’m doing feels like an exercise in futility. It doesn’t feel like I’m ever going to get to the point of having a baby. Or even getting to see a legitimate positive pregnancy test. Clomid is a scary drug, as it increases your chances for ovarian cancer later in life if you take it for too many cycles. My chances for ovarian cancer are already slightly elevated as I have a history of female colon cancer in my family, but it could have been ovarian/uterine but my grandmother was embarrassed about it and wouldn’t let her doctors tell us (and my great-grandmother definitely would not have talked about it). Any cancer “down there” increases your chances of ovarian cancer, so that’s unsettling.

The medicated cycles are frustrating. They feel like my body is no longer mine. I already spend so much time feeling that way when my conditions decide to take over, and now I’m doing it to myself on purpose. Thankfully, they’re not too bad yet, but the mood swings are bad enough to feel alien to me. I’m more volatile and cranky.

Becoming numb is frustrating. I’m angry, I’m upset, I’m heartbroken, I’m shattered, I’m exhausted on every level, I’m annoyed, I’m confused. I couldn’t cope with the mess anymore, so becoming numb was necessary. It broke me to see Dan’s heartbreak flash across his eyes when he realized I was “okay” when my period started. He doesn’t articulate it, but he knows that I do everything I can to avoid going numb. It can’t be easy to see the love of your life have to close off their emotions to survive.

But, you know what? I’ve been able to laugh again. Like, truly laugh. Not only the “I should be laughing” forced laughter. I’ve laughed so hard I had tears in my eyes. I can’t remember why I was laughing, probably something insignificant, but I laughed hard. It was wonderful. And, at the same time, I felt incredible guilt over it. “I should be upset, not laughing,” I said. But, I shoved the guilt into the “numb bubble” and moved on. Someday, I’ll address the bubble and unpack it, but for now I’m numb.

Sometimes, becoming numb is necessary. If that is you, for whatever reason, please don’t feel guilty about it. Everyone does what they need to survive, and everyone does it for different reasons and at different times. Take care of yourself, please.